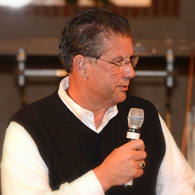 I grew up on a 1,100-acre ranch in Eastern Oklahoma, which taught me the importance of character and hard work. That was a lifetime ago, but I never lost that

influence in my life. The love of sports began at an early age, culminating in playing football for Northeastern Oklahoma A&M Junior College and again as a walk-on at the University of Arkansas, where I would graduate in 1975.

I began sensing God’s call to the ministry during my college years. On my commissioning physical to go active duty as an officer in the United States Marine Corps in August of 1975, God changed the course of my life. A bee sting allergy nullified my six-year obligation to fly and active duty.

So, in November of 1975, on the campus of Middle Tennessee State University, I began a student ministry called the “Followers Fellowship,” where I would discover my life purpose. In 1977, I started my first pastorate at a Free Methodist Church, a church plant outside Tulsa, Oklahoma. During that time, I pursued a Master of Divinity degree at Oral Roberts School of Theology, at the time, a fully accredited United Methodist Seminary.

Ten years later, in 1987, I accepted an opportunity to pastor a small congregation

in Brentwood, Tennessee: New Hope Community Church. At that time, 20 families composed the core group of members. I spent 27 years as the senior pastor and

of thousands of dollars to overseas and local missions. One year, it provided a

quarter of a million dollars and helped establish New Hope Bible College, an

English-speaking school training pastors from all over India.

In 2014, a year after a vision I gave to the church for a planned leadership transition period, I stepped aside as the senior pastor to become the pastor over its members’ pastoral care. I retired in June of 2019 officially after forty-two years of ministry and honored Pastor Emeritus of New Hope.

Cathy, the unsung hero, confidant, and strength of my life, married in 1976. We have two children, Joel, and his wife, Joanna, Laura and her husband, Justin. We are also proud of six beautiful granddaughters.

Joshua 1:8 continues to be a guiding truth for my life: “Do not let this Book of the Law depart from your mouth; meditate on it day and night, so that you may be careful to do everything written in it. Then you will be prosperous and successful.” NIV

Get in Touch with the “Kingdom” Reality! 

0
Inspiration: Meeting Me just as you are...
Read more
Grief and Loss

Overcoming the Hidden Trauma of Life 

0
Inspiration: You race to one destination and...
Read more