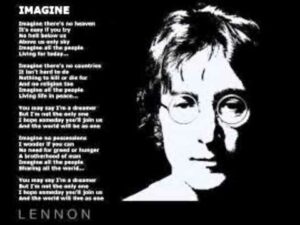 “Imagine there’s no countries, it isn’t hard to do. Nothing to kill or die for, no religions too, Imagine all the people living life in peace .” The words of John Lennon’s song resonates across France today. However, we don’t live in John Lennon’s world. Humanity will never achieve world peace in its own power. Denying the reality of evil carried out in the name of any religion or political group is foolishness. So what is the response to some who would enslave us in a religion that takes us back to the 7th century, denies religious freedoms, treats women as property, beheads innocent children and murders people in the streets of Paris?

Let me say as a Christian or for those who desire peace it is one thing to turn the other cheek, but another to be executed and wiped out of existence. That is the reality of what is taking place throughout the Mideast and world today.

There is a significant example in history. An official delegation from Constantinople was sent to the Saracens (Muslims) to negotiate peace; the Muslims argued that Christians disobeyed God’s commandment. They said: “Why do you Christians violate Christ’s commandment to love your enemies, but instead persecute and kill us?”

The Saracens answered, “He that fulfills both, of course.” Then Cyril said, “As individuals we forgive our enemies, but as a community we lay down our lives for one another. For the Lord has said that there is no greater love than to lay down one’s life for one’s neighbor. As a community, we protect one another and lay down our lives for one another. Not only is your aim to enslave us physically, but you also aspire to enslave us spiritually. It is for this reason that we defend ourselves. The (defense of ourselves) therefore, is justified.”

Today, I can only imagine the “Resurrected Christ” bringing peace to a fallen and evil world. Maybe my faith is too weak to believe that love conquers all in this world.and that I should not defend myself or others.  My faith declares “Love” was nailed to a tree and revealed one day that love triumphs over evil. So, I will do my best to love, and live in peace right now until that day comes.

A Whisper in the Wilderness

The Day I saw God Everywhere

A Glimpse Beyond the Veil

0
When we encounter Christ, we see a glimpse beyond the...
Read more
Contemplation

0
I will be your defender but learn to let your...
Read more